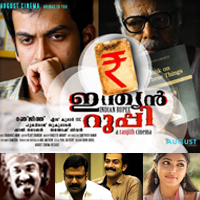 Before getting into analysis of Indian Rupee, one thing I would like to point out is the refreshing attempt on the part of director Ranjit to portray the regional slang ie in this case Kozhikode language throughout a film. In most commercial films writers attempt to play safe by going for that standard Malayalam so that no one is offended.I don't know how much of the Kozhikkodan Bhasha here in this film is authentic, since I am not from Kozhikode and that is one thing Kozhikkodan natives have to decide.

This film deals with two small time real estate brokers,their dreams to make it big ad the lessons learned in that process when large sums of money is involved.Prithviraj here plays the role of that honest,but one with big dreams and with the gift of gab tries his best to achieve his dream,that is become rich. But everything is not rosy at it looks since,if one has to become rich overnight,there are lot of shadier people out there with far shadier deals.This poor broker learns the lessons of life the hardest way when he gets involved in one such deal.

Director Ranjit has to be appreciated for maintaining a racier screenplay. It is able to maintain the interest of the viewer and keep him in a state of suspense about the action that unfolds before him.But there are some roadblocks that derail the flow.I did not get the far more importance given to the role played by Thilakan.I feel that character was quite unnecessary to this story.It seems as if Ranjit is so enamored of Thilakan that he invented a role and just added to the screenplay just for the sake of it. I am not denying that Thilakan has given an impressive performance,but this character do not add any value to the film.One of the cringe worthy scenes from the film was the preaching part on Dowry by already proven crook Thilakan and I found it quite ironic.Regarding performance of Prithviraj, I have to say that he was quite impressive,but still I  feel that he has to go miles before his acting look natural like that of the two M's. In some scenes I find him somewhat wooden.Timi Tom and Rima have played their supporting roles well.The performances throughout are satisfactory and film looks at a contemporary subject in an authentic way rather than with the usual commercial trappings.

My  Verdict : GOOD
Posted by Adithyajones at 13:56
Email ThisBlogThis!Share to TwitterShare to FacebookShare to Pinterest
Labels: Malayalam films(2011)